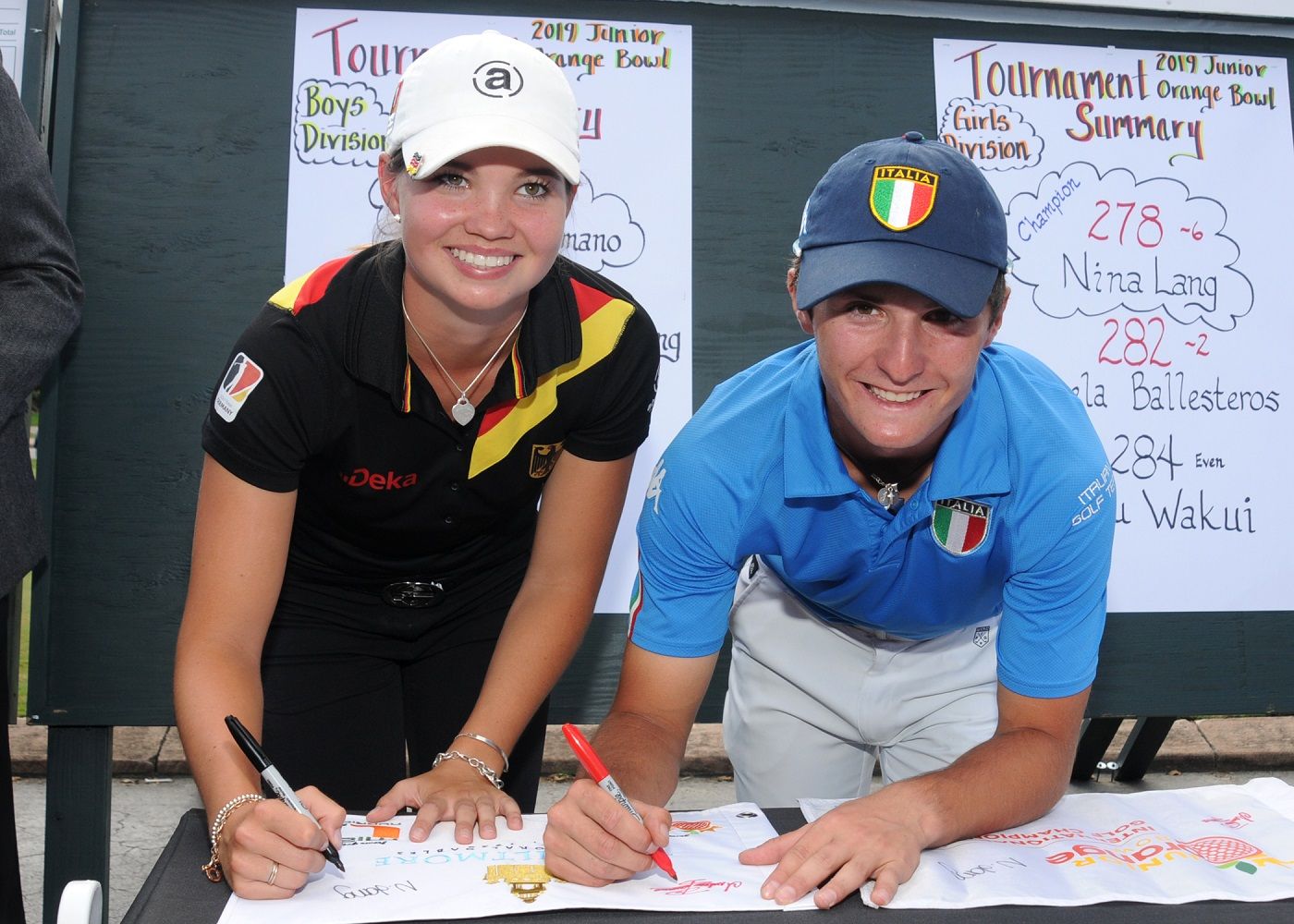 CORAL GABLES, Fla. (Jan. 6, 2019) – There’s rarely a good time to rebuild your putting stroke, but it was just a month before arriving at the Junior Orange Bowl International that Andrea Romano embarked on what could have been a drawn-out project.

“I didn’t know about this change,” the Italian teen said. “I thought it would take three or four months.”

Romano received his initial payoff Sunday, overcoming some early shakiness to become the 55th winner of the Junior Orange Bowl boys’ title. A closing eagle provided a finishing flourish at the historic Biltmore, carding a 2-under-par 69 that left him four shots clear of his nearest rival.

“Putting is the point of golf,” said Romano, who won in his third visit to the South Florida junior showcase. “If that works, you have a chance to win every tournament. Last year my putting was sort of bad. This year it was better and now I’ve got (the trophy).”

Germany’s Nina Lang also rode some clutch putting down the stretch to claim the girls’ crown, carding three birdies in her final six holes to shut the door on any challenge from Peru’s Daniela Ballesteros.

“Where it was most important to play good, I played good,” said Lang, who finished four shots ahead of Ballesteros after Sunday’s closing 72. “I think I played really good under pressure and put pressure on the other girls. … They did really great, too, so it was a hard fight.”

“For us, it is really big,” said Lang, who triumphed in her first visit to the event. “Everyone knows the Junior Orange Bowl, so it’s a really big tournament.”

Romano goes into the books as the second Italian to capture the event, five years after current European Tour pro Renato Paratore. He recorded top-20 finishes in each of the past two editions – including an opening 65 last winter – but struggled to find consistency on the greens.

“I have the yips with a normal grip,” Romano said in a moment of golf candor. Though he switched to a claw grip a couple years back, he started working with his coach a month ago to put more of his body into the stroke and depend less on his hands.

At the Biltmore, it produced a couple of impressive streaks. On Friday, he birdied five of six holes after the turn for a 67 that moved him into contention. One day later, he closed a 66 with four straight birdies to draw alongside Alex Vogelsong.

Toss in Sunday’s 69, and Romano was the only golfer to produce three rounds in the 60s. He finished the week at 12-under 272.

Spain’s Jose Luis Ballester took runner-up honors after a 65 that was the best round of the week, capping his performance with a curling 50-foot eagle putt at No.18.

Taking advantage of one of golf’s new rules, Ballester put the flagstick in the hole and watched as his putt kissed the stick before dropping. “That was kind of funny,” he said.

Vogelsong (Palm City, Fla.) dueled Romano for most of the day, standing tied for the lead with six holes to play before Romano birdied No.13. The Floridian had a chance to draw even again with a 5-foot birdie chance at the par-5 15th, but pulled it left of its target.

At No.16, Vogelsong ran into trouble when he had to take relief from a cart path behind the green, watched his chip not reach the crest of the raised putting surface and trickle back down the hill on the way to a bogey. He carded a Sunday 74, slipping one shot behind Ballester into third.

“I’m disappointed, but it was a good week,” he said. “(Romano) played great golf today and deserved to win.”

Lang took a four-shot lead into the final round, but watched the margin get sliced in half as she played her front nine in 3-over. She finally carded her first birdie at No.10, though she bogeyed the next two before finally finding her rhythm.

At both No.13 and No.14, Lang drained mid-range birdie putts to force Ballesteros to make hers to stay within striking distance.

“I didn’t get any open windows today,” said Ballesteros, who also carded a closing 72. “On that back nine, she made really great putts for birdie.”

Lang sealed the outcome with a 20-foot birdie at the par-4 17th, finishing with a four-day total of 6-under 278. With 67s in the middle rounds, she was the only girls’ competitor with two rounds that broke 70.

The Junior Orange Bowl was the first tournament held on the revamped Biltmore layout, which closed for six months to restore the course closer to its 1925 Donald Ross footprint discovered in renderings a few years ago.

The Golf Championship is one of 15 athletic, artistic and cultural events that make up the Junior Orange Bowl International Youth Festival, celebrating its 70th anniversary in 2018. The festival draws more than 7,500 youth participants to South Florida’s community each year.