Support from Croatian greats does wonders for Mrcela 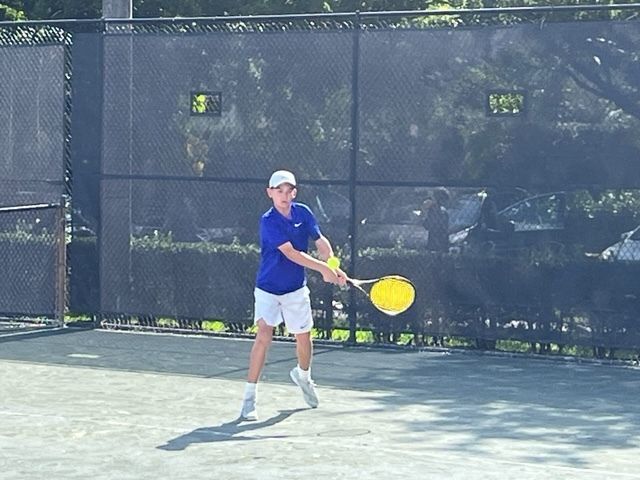 CORAL GABLES, FL - When your occasional hitting partner is 2001 Wimbledon champion and Hall of Famer Goran Ivanisevic and you receive regular advice from 1997 French Open champion Iva Majoli, it’s not a stretch for fellow Croatian/American Mark Mrcela to believe he, too, someday can win Grand Slams.

He’s truly a dangerous floater in the draw. Mrcela, 12, who is unseeded and only got into the tournament because Ivanisevic and Kevin O’Connor, the vice president of sports at Saddlebrook Tennis Academy, sent a letter to the Croatian Tennis Federation and that’s how he got into the main draw of the Boys’ 12s.

Mrcela, who was ranked No. 1 in California in the 12s when he was 10, moved to Wesley Chapel to attend the Saddlebrook Tennis Academy on a full scholarship. He has been playing and winning Level 5 tournaments in the 14s, so he didn’t play enough tournaments to be ranked in the 12s.

During a break in his practice session with his disciple world No. 1 Novak Djokovic, Ivanisevic called Mrcela’s father, Jaksa, during his first-round match and left a voice message of support: “Let’s go Mrcelas [Croatian]” and “Let’s go Mark, you’re the best maestro,” in English.

“He’s a very good friend who is like my dad’s brother,’’ said Mrcela, who as a wild-card entrant, reached the quarterfinals of the recent Eddie Herr International Tennis Championships in Bradenton before losing to eventual champion, the second-seeded Teodor Davidov (top seed here).

“I hit with him a couple of times a year. We don’t really play points, but he’s still good.”

Mrcela was up 6-2, 3-1 on Davidov, who is into the third round with his unique ambidextrous style of having two forehands and no backhand.

“He changed the game and I fell a little,’’ Mrcela said. “Both of his shots are the same and he has a good down-the-line, too. He has two forehands so it’s hard to know which side is worse.”

Jaksa, 41, and Ivanisevic, 50, grew up on the same street in war-torn Split [then Yugoslavia], but became true friends in 2008 when they moved to Los Angeles [with their wives and children], and began, “playing tennis every day.”

Jaksa dreamed of playing professional tennis, but his parents couldn’t afford it, so he became a professional black belt Tae Kwon Do teacher and coach. He’s now a real estate developer in Croatia. Mark’s mother Idora Hegel Mrcela also wanted to play pro tennis, but her parents pushed her into figure skating. She became a seven-time Croatian national champion and skated in the 2002 Winter Olympics in Salt Lake City and the 2006 Winter Olympics in Turin. In both, she finished 19th in the free skate.

At Saddlebrook, Mrcela hits with his father for three hours in the morning and then another four hours with his academy coaches in the afternoon when they’re not playing matches.

While he doesn’t do Tae Kwon Do, Mrcela boxes. That shows in his one-two punch on the courts this week.

“He was born for this,’’ Jaksa said. “When he was 3-years-old in Split where we spend our summers, he would take a hoop and play tennis over my head with a ball”.

In addition to having Ivanisevic in his corner, Mrcela receives regular advice and tips from Majoli, who was his mother’s maid of honor at his parents’ wedding. Majoli, who reached No. 4 in February 1996, manages the men and women’s tournament in St. Petersburg, Russia. Mark also received six months of coaching from Majoli’s father, Stan, and her brother Dado.

“She talks to him almost every day and at Eddie Herr she was watching the video of every one of his matches,’’ Jaksa Mrcela said. “Her dad Stan mentored me and he was at Nick Bollettieri’s coaching  [Monica] Seles. He’s involved with Mark’s game.”

Ivanisevic, who reached No. 2 in July 1994 and won 22 ATP singles tournaments, was well known for his wacky behavior on court whether he was smashing rackets or putting the balls in his mouth. In many of his post-match press conferences, Ivanisevic used to talk about, “Good Goran and bad Goran.”

As for Mark Mrsela, so far this week he’s only been showing his, ‘Good Mark,’ side.

In the Girls’ 12s, top-seed Christina Lyutova of Newport Beach, Calif., downed Natalie Augustyn, 6-0, 6-2; No. 7 Stone Harper of Greenwood, S.C. has yet to drop a game in another 6-0, 6-0 romp over Jesslyn Kartawinata. Fourth-seeded Anita Tu, No 6 Julieta Pareja, No. 3 Lia Belibova and No. 5 Ciara Harding all advanced.

In the Boys’ 14s, unseeded Cruz Hewitt, son of Aussie great Lleyton Hewitt, lost 6-1, 6-1 to ninth-seeded Carel Ngounoue of Washington, D.C. However, Jagger Leach, seeded 17th, the son of former No. 1 Lindsay Davenport, moved on with a 6-1, 6-4 win over Adrien Abarca.

Top-seeded Max Exsted of Miramar, toughed out a 6-1, 7-5 win over Mikael Arseneault. Fourth-seeded Nicholas Patrick was bounced by Alexandru Hebhang of Bradenton, 6-1, 2-6, (10-4). Fifth-seeded Alejandro Arcila of Jensen Beach, rolled over Mathis Valenta 2 and 1, and Maximus Dussault of Stuart also advanced as did No. 3 seed Darwin Blanch of Deerfield Beach.