From Down Under to Down South, young Aussies making huge moves in Junior Orange Bowl 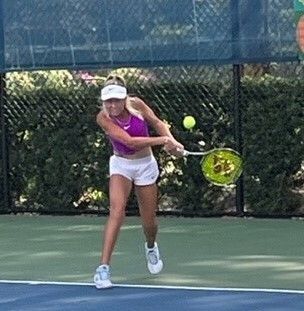 From Down Under to Down South, young Aussies making huge moves in Junior Orange Bowl

During that bygone era, Margaret Court and Evonne Goolagong were popular women champions. The United States and Australia owned Davis Cup titles with 32 to 28 respectively. Then came the Down Under drought with occasional breakthroughs by former No. 1s Lleyton Hewitt and Patrick Rafter in the late ‘90s and early 2000s.

However, the combination of lovable world No. 1 Ash Barty and the enigmatic, yet wildly talented Nick Kyrgios has helped reignite the flame at the junior level, leading to Aussie youngsters to exchange their cricket bats for rackets.

That is evident at this week’s 61st Junior International Tennis Championships with a contingent of 12 Aussie juniors doing damage in the 12s’ and 14s’ boys and girls draws. On Thursday at the Biltmore Tennis Center, all four Aussie girls advanced into the third round, including third-seeded Emerson Jones, fifth-seed Renee Alame, 17th seed Kimiko Cooper and unseeded Koharu Nishikawa.

In the boys’ 12s at nearby Salvadore Park, top-seeded Taiki Takizawa, a strapping 5-10, thick 12-year-old who was born in Tokyo but moved to Australia at 2, hasn’t dropped a set on route to the round of 16. He won the doubles title at the recent Level 2 Eddie Herr International Championships in Bradenton.

No girl has ever won a Junior Orange Bowl title in any of the four age divisions (12s, 14s, 16s, 18s). That’s partly because not many Australian juniors made the long, expensive journey to Florida in December when they hold their own national championships, held before Christmas. The pandemic changed their travel plans.

“COVID is the answer because the last couple of years we couldn’t travel,’’ said Nicole Kriz, one of six national coaches on the trip. “Previously, a player would go with their private coach but because of COVID we have a really aggressive schedule of travel this year for our juniors. Tennis Australia is investing a lot in these young athletes so they could get out and see international players. Where better to see it than the Orange Bowl?

“One problem in the past is we’ve been a bit timid, probably too humble as a country, almost too nice. Now, we’ve got some fierce young competitors coming through, which is great to see. They’re not respecting the competition too much because they want to be amongst the best and we’ve seen the results.”

Alame, 13, and Jones, 14, reached the semifinals and finals respectively at Eddie Herr, both losing to 6-foot-2 Yihan Qu of China, the second seed here who advanced in straight sets over Sena Yoon of Buford, Ga. Top-seeded Hannah Klugman, 13, who attends Wimbledon High School outside of London and actually played in the main draw of Junior Wimbledon this summer, is also into the round of 32.

“Definitely, [Barty and Kyrgios] success is really good for us young ones to look up to and be inspired by them and hope to play like them,’’ Alame said. “Barty showed us we can play in big tournaments and just own the courts, like, Australians can do anything.”

Ninth-seeded Thea Frodin of Los Angeles, who portrayed a young Serena Williams in her tennis scenes in the hit movie, “King Richard”, played like Serena on Thursday in a marathon 7-5, 7-5 slugfest victory over Brooke Wallman of Long Island.

Also advancing in the girls’ 14s are ninth-seeded Nicole Okhtenberg, the 2022 Easter Bowl champion who trains at the Evert Tennis Academy in Boca Raton, and sixth-seeded dynamo Russian Ksenia Efremova, 13, who has trained at Patrick Mouratoglou Tennis Academy in France for the past four years.

“She’s got confidence and never lets up,’’ said Efremova’s coach Sandra Zaniewska. “I don’t think it happens often in kids this young but she wants it all. The Russian fire is there, absolutely. What differentiates her is that first, is the will of wanting it badly, and the second thing is that intensity translates onto the court.”