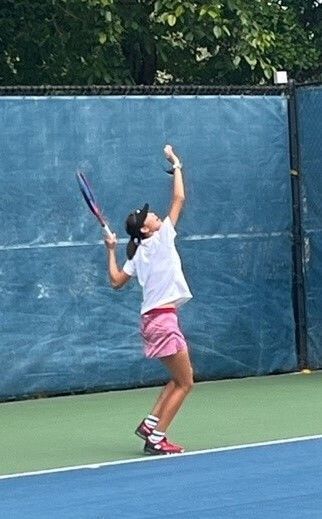 Although the Junior Bowl International Tennis Championships has been held in South Florida for the past 61 years, the prestigious USTA Level 2 tournament has taken on a Far East flavor as it heads into the later rounds.

In the boys’ 12s on the clay at Salvadore Park on Saturday, top-seeded Takei Takizawa, a Tokyo native but playing for Australia since moving there when he was two, defeated No. 9 Daniil Berezen, who trains with Rick Macci in Boca Raton, 6-3, 7-5 to reach the semifinals.

The sturdy 5-10 left-hander, who won the doubles at the Level 2 Eddie Herr International championships in Bradenton earlier this month, hasn’t dropped a set in his five matches. He broke Berezen’s serve to avoid a second-set tiebreaker with three huge ground-stroke winners.

“He got his level up and I struggled a little bit up and down,’’ Takizawa said. “I managed to get through it at the end. At the end of the 5-6 game, I reset on the change of ends. I won the game before, so I was already in a positive mood.”

Takizawa will play Donjae Kim after the ninth seed from Korea upset Atlanta native No. 4 Tomas Laukys, 6-2, 6-4. Laukys, a lanky 6-foot lefty who has moved to France to train, bricked an easy volley to get broken at 4-4.

In a lower half quarterfinal, No. 3 Tavish Pahwa of India, bounced back to win 2-6, 6-3, 6-2 over Advay Singh, who lives in Frisco, Texas where he trains with coach Dave Licker.

Pahwa, No. 1 in his country after sweeping the National singles and doubles tournaments, utilized his three-minute coaching break between sets to conference call his father Gaurev and coach in India. It paid dividends.

“I want to be No. 1 in the world and win the most Grand Slams,’’ said Pahwa, making his first trip to America.

There is an American hopeful in the final four as No. 2 Tuck Tabb of Birmingham, Ala., continued to dominate all comers in a 6-1, 6-1 victory over Aran Selvarassan of English-Indian descent. The thin, 5-9 Tabb, who lost in the finals of Herr, hasn’t allowed more than three games in any set of his five matches.

“I’ve been playing a lot of good players but I’m playing really well all week, trying to stay balanced with my core, especially in my positioning, he said.

Tuck, an all-around athlete, decided to focus on tennis because he could rely on himself rather than his teammates.

“When I was 9 or 10, I won my first tournament and I just loved tennis,’’ said Tuck, who has never played Pahwa. “I was usually the pitcher, and I couldn’t get any run support after usually holding people to no runs my team couldn’t get any hits. In tennis it’s all up to me.”

The Asian influence is rampant in the boys’ 14s on the hard courts at Crandon Park, where top-seeded Sehyuk Cho of Korea, winner of Herr’s 14s, has yet to drop a set. He cruised into the final eight where he will face Taiwan’s Kuan-Shou Chen, the seventh seed. China’s Weiyi Kong (17) knocked out ninth-seeded Yannick Alexandrescou of Romania in three sets.

No. 3 Ivan Ivanov of Bulgaria, has yet to be challenged. Ninth-seeded American Jack Secord surprised No. 5 Vito Antonio Darderi in three sets which may not help the ratings of an ongoing documentary on Italy’s top junior.

In the bottom half, Long Island’s Jack Kennedy, the sixth seed, has taken full advantage of late withdrawals of the second and fourth seeds, as he eked past Canadian Xavier Massotte, 7-6 (3), 7-6 (1).

In the girls’ 12s at Crandon, Far East players continued to roll with No.2 Yeri Hong of Korea, No. 3 Haniya Minhas of Pakistan, No. 4 Yui Komada of Japan and No. 5 Sun Xinran of China all into the quarterfinals. Top-seeded Christina Lyutova, a Russian training outside of Seattle, will play Asian American Caroline Shao of Boca Raton on Sunday.

The Asian dominance continued in the girls’ 14s round of 16 on the hard courts at the Biltmore Tennis Center, where second-seeded, 6-2 Yihan (Sophia) Qu of China clawed back from 1-4 down in the third set to outlast Spain’s Polina Kuharenko, 4-6, 6-2, 6-4.

Qu, 13, who in her first trip to the U.S., won the Herr 14s and is alive for the junior version of the Sunshine Sweep. The two tall teens slugged it out from the baseline with flat, warp-speed groundstrokes until Qu was gifted her third match point on a double fault.

“I just focused on every shot and game, do my best and don’t put too much pressure on myself,’’ said Qu, via translator Sen Han, an IMG Tennis Academy (Bradenton) liaison where she has trained this month. “I love tennis because of the rhythm, the rallies, the sound it makes when it bounces off the tennis racket. It’s relaxing.”

“She has a big serve, a big forehand and a big heart,’’ said Hong Lue, Qu’s Chinese Federation coach.

Top-seeded Brit Hannah Klugman, who attends Wimbledon High School in her hometown, coasted to a 6-0, 6-0 rout over No. 9 Nicole Okhtenberg, who lives and trains in Boca Raton with the Evert Tennis Academy.

“I’m playing positive going after my shots, am relaxed, just here to enjoy it,’’ said Klugman, who hasn’t allowed more than two games in her four matches in route to the quarterfinals.

Klugman, 13, sprouted four inches to 5-7 since playing here last year. In July, she received a wild card into the Junior Wimbledon main draw on an outside grass court against 18-year-olds. This will be her final 14s’ tournament as Klugman plans to play ITF 18s next year.

Also advancing into the quarters were No. 3 Emerson Jones of Australia, who after dropping six straight games in the second set, refocused to prevail 6-4, 2-6, 6-1 over Julieta Pareja of Los Angeles, the winner of the USTA 14s National Clay Courts last summer.

Fellow Aussie Kim Cooper fell 6-2, 6-1 to Maria Aytoyan (9), an American Armenian who has trained at Evert’s the past two years.

Russian 13-year-old dynamo Ksenia Efremova (6), who lives in France where she trains at the Patrick Mouratoglou Tennis Academy, triumphed 6-1, 6-1 over Abigail Gordon, who lives in Boca Raton where she trains with former Evert coach Mandy Wilson. Also advancing was No. 4 Adelina Lachinova of Latvia, and No. 7 Luna Maria Cinalli of Argentina.