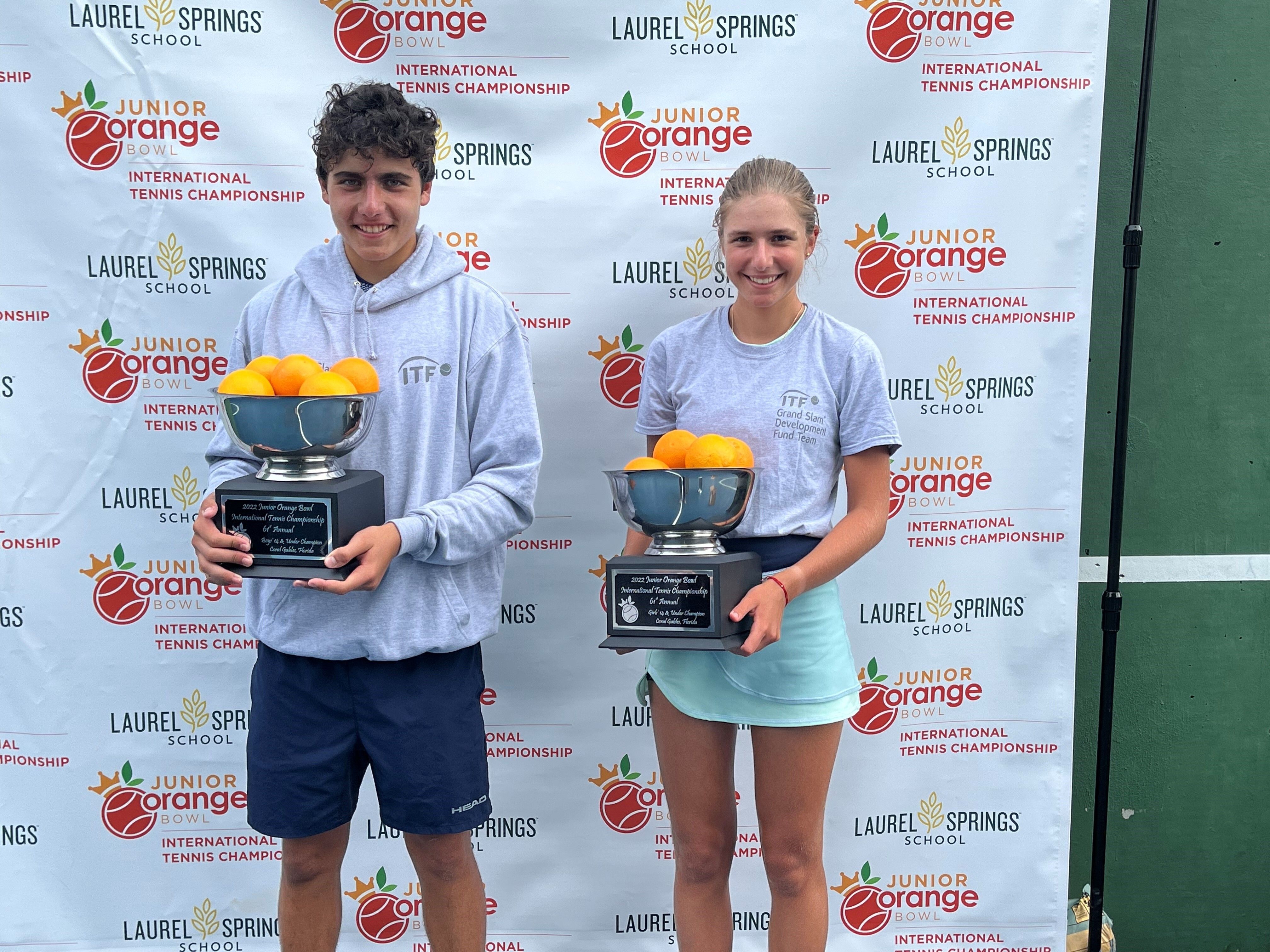 CORAL GABLES – History was made in the Junior Orange Bowl Championships on a picturesque Tuesday by Bulgarian Ivan Ivanov and Latvian Adelina Lachinova, members of the ITF Grand Slam Player Development Program.

Ivanov, the No. 3 seed, was far too powerful for the cerebral attack of Jack Kennedy, the No. 6 seed from Huntington, New York, who fell 6-2, 6-3 in the boys’ 14 final on the hard courts at the renovated Biltmore Tennis Center.

Ivanov, who will most likely be ranked No. 1 in the Europe-14U; became the first Bulgarian boy to win the 14s’ title in the tournament’s 61-year history. He surpassed countryman Grigor Dimitrov, a finalist in 2005, who went on to be ranked a career-high third on the ATP Tour in 2017 (now 28th). Bulgarian Manuela Maleeva won the girls’ 14s title in 1981 and went on to be ranked a career-high No. 3 in 1985 with 19 singles titles.

“Of course, I’m proud but it’s nothing; it’s under 14s, so we continue,’’ cracked the 5-foot-10, muscular Ivanov, 14, who began training full-time at Rafael Nadal’s Tennis Academy in Spain in August. “Jack is a really good player but attacking is my style. I tried to make my best movement to be faster, to be stronger and I think I did it.”

It was a clean historic sweep in the 14s’ divisions for players from the ITF GSPDP, which gives annual scholarships to 12 juniors from Europe and pays all of their traveling and tournament expenses. Lachinova, the fourth seed from Latvia, became the first boy or girl from her country to win a Junior Orange Bowl 14s’ title after she stunned top-seeded Brit Hannah Klugman 6-1, 5-7, 6-3.

“My ITF team back home in London who organized everything were very happy after watching the matches on the [TennisAnalytics.com] streaming,’’ said ITF coach Petra Russeger. “It means a lot for the program but more to the players on the team to see what they can achieve. It’s very good for the program to bring home trophies, very motivating.”

Lachinova, 14, who picked up her ground-stroke pace and went after Klugman’s backhand in the third set after her 10-minute coaching break, avenged a loss to the No. 1 ranked Brit in the ITF World Junior Tennis 14U team championships in August in Czech Republic.

“That was on clay; this was hard court,’’ smiled Lachinova, via Russian translator Tomas Laukys, whose son Tomas Jr. reached the quarterfinals in the boys’ 12 division last week.

The usually poised Klugman seemed out of sorts from the start and a code violation for an audible obscenity handed Lachinova an early break. The Wimbledon native and resident, who owns an all-court solid attack with a formidable serve, had cruised in her first six matches without dropping a set while surrendering just 13 games.

On Tuesday, Klugman, just 13 and already ranked 489th in the ITF World Rankings for 18-and-unders, never seemed comfortable with Lachinova’s slower pace balls and was too impatient to stay in long rallies with an opponent who rarely made an error. Klugman’s powerful serve was negated by a sore shoulder, which led to several double faults and a medical timeout.

“I just didn’t play the right way,’’ said Klugman, who committed an unofficial, uncharacteristic 31 unforced errors in the first two sets to Lachinova’s 21. “I was all over the place in the first set. … I wasn’t prepared to stay in the rallies. Obviously, she gets a lot back but taking it when you don’t have it, overplaying, which I did in the first set and the end as well was a good learning experience.”

Lachinova got the critical break at 3-3 of the third set on another errant forehand from Klugman and held for 5-3. She broke Klugman again when the statuesque Brit curled a simple midcourt forehand into the net. Lachinova collapsed to the ground and seconds later let out a scream of joy.

“I can’t believe I won,’’ said Lachinova, whose parents are Russian. “I’m very happy I won this tournament that [started] with 128 girls and I’m the best. I’m proud of myself.”

Despite just training on court for 90 minutes a day home in Riga with only her coach because of lack of elite junior players, Lachinova has won 12 tournaments this year. In 2023, she said she will challenge herself by moving up two age divisions and two [skill level] classes of tournaments into the J3 18s.

While Kennedy didn’t win the larger bowl of oranges in the trophy bowl, Russian immigrant Christina Lyutova, the No. 1 seed playing for the US (allowed by the USTA because she has a green card) achieved her year-long goal of winning the girls’ 12 title after losing in the finals last year with a 3-6, 6-2, 6-4 marathon victory over No. 2 seed Yeri Hong of Korea.

“When I was down 1-4 in the first set my [new] goal was just to focus and hit every ball in,’’ said Lyutova, 12, who lives in Redmond, Wash., where she trains at the Gorin Tennis Academy. “I wanted to win because last year I [lost] in the finals.”

Hong, 12, who was coming off a title at the Eddie Herr International Championships in Bradenton a few weeks ago, had been undefeated in her first trip out of Korea.

Utilizing a consistent attack with a wicked crosscourt backhand, Hong went up 4-1 in the deciding set before nerves set in, allowing Lyutova to win the final five games. Match point was an early Christmas gift as Hong’s wild backhand went astray.

“When she started to miss, I felt more like I can do it,’’ said Lyutova, who skipped Eddie Herr but won the girls’ 14s USTA National Indoors in Toledo, Ohio in November. “I just wanted to win so much.”

Not quite all-American, but Lyutova becomes the first US representative to win since Clervie Ngounoue in 2018. Next month she will move up two age levels to play the USTA Winter Nationals 16s in Orlando. Lyutova said she wanted a cat for Christmas but will happily settle for the Orange Bowl trophy.

An opportunistic Kennedy hadn’t dropped a set in his first six matches, partly because he didn’t face a seed higher than No. 17 after the second and fourth seeds withdrew at the last moment. Kennedy, who had a great month and year, won the USTA Clay Courts singles and doubles, the Herr doubles’ title and before coming to Miami was part of the winning US Team in the America’s Cup in Orlando.

“It’s definitely been an exciting month, full of ups and downs with the tournaments,’’ said Kennedy, who will head to Costa Rica in January to play ITF J4s. “This isn’t the result I wanted. … I knew he was a great player, but I was really shocked how he came out blazing in the first set.”

His coach Greg Lumpkin from the John McEnroe’s satellite tennis academy on Long Island, flew in Monday to watch Kennedy play the semis and then the final, was thrilled with his disciple’s progress.

“Jack has had a phenomenal couple of weeks,’’ Lumpkin said. “He played some great competition, played terrific and had a good run. Ivan was just too good today. In the big moments Ivan came up with great shot. Every time he was clear in what he wanted to do, executed flawlessly and completely deserved to win.”

Ivanov, who possesses a huge serve and forehand, utilized his quick-strike attack to constantly put Kennedy on his heels. Although Kennedy mixed it up with drop shots and forays to the net, unless he put his volleys away, Ivanov would rip an inside-out forehand passing shot past him. The unofficial count gave Ivanov 19 winners and 20 unforced errors to Kennedy’s 31 errors and five winners.

Ivanov blasted several aces that ricocheted off the back-fence banner, the tournament’s presenting sponsor, Laurel Springs School, the online school that many of the 800 Junior Orange Bowl entrants are enrolled in. FILA also helped sponsor the prestigious event.

Ivanov was reminded that he had to save five match points in his three-set victory (15-13 in decisive tiebreaker) over American Jack Secord in the quarterfinals just to remain in the tournament.

“I live for pressure,’’ said Ivanov, who gave up one game in his semifinal victory over Kuan-Shou Chen (17) of Taiwan. “I win. I fight and I continue. It’s nothing. It’s under-14. We’re going to see in the future.”

In the nearer future, Ivanov hopes to take a photo and possibly hit with his hero, Nadal, when he returns to his academy after spending Christmas with his family in his hometown of Varna.

On Monday, Korean Dongjae Kim, the ninth seed, downed Tabb Tuck, the second seed from Birmingham, Ala., 6-3, 6-1 to become the fifth Korean boy to win the Junior Orange Bowl 12s’ title, but first since Seongchan Hong and Hyeon Chung won back-to-back titles in 2009 and ’08 respectively.

In the boys’ 14s back draw Chen (7) took third place in a walkover over injured Weiyi Kong of China.